42 days of development and a new idea

One and a half month into development I hit a roadblock. It wasn’t any of my usual “WTF why it doesn’t work” things, it was a creative obstacle. In my last entry, I wrote that there are no generated levels in my game, all the levels will load from the pre-generated file and on the same level player will always get the same obstacles. But that lowers the excitement of re-playing levels, and on top of that — I am not sure of my ability to create a level that is exciting enough for a player to be interested in re-playing it.

Of course, I started to search for answers in the places where I usually find them — in books. At this point, I am reading several books — A Theory of Fun for Game Design by Raph Koster, Surviving The App Store by Amir Rajan, and also re-reading The Art of Game Design: A Book of Lenses by Jesse Schell. I always read several books at the same time. It compensates my inability to focus on something for long, so any moment I start feeling my attention is drifting away (on the days when your dog wants to have a walk at 6 a.m. that happens like every ten mins), I switch to something else.

Also, I checked some interesting articles, for instance:  Endless Runner Games: How to think and design (plus some history) by Ben Chong, Gameplay Design Fundamentals: Gameplay Progression by Mike Lopez and Designing Games That Don’t Suck by Jason Bay.

But after reading several chapters, articles and posts I wasn’t any closer to the answer. It looks like you can’t become a level designer after a short read (who knew?). So I decided to take for granted that my levels on their own won’t be interesting enough, and I should look for other ways to make my game more interesting. I returned to some of my old ideas. For instance: casting spells, similar to “Infinity blade”. But that would slow the game down, and it would lose the momentum. Or like having enemies that are vulnerable to a particular type of weapon. But how does one show that this enemy can be killed only by fire? And how the player will remember that water enemies are killed only by fire, but wood enemies by stone?

I was lucky. Every year here in Sydney we have a Vivid festival and this year there was an interactive installation wormhole-galaxy and it was awesome!  To put it simply — it is a game for four players, each one has a coloured button. There is a character that runs through the pipe with coloured obstacles and by pushing the button of the same colour player destroys the obstacle.

That’s when it struck me. I can use my idea with elements, distinguish obstacles with colours and instead of generating levels, just have a pre-programmed level with randomised colour elements for obstacles. This way on one level player has to have a water weapon to destroy the blue barrier, but if he replays the level this obstacle can become green for wood or white for air.

At this point, I finished the menu that allows to choose the elements for the level and hopefully I’ll start to work on randomisation in the next couple of days. 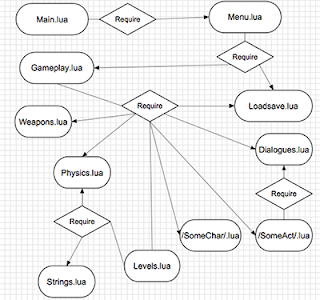 I also worked a bit on my package plan, just to remember which package requires what and how the relationships look. Quite a mess! And that’s only my 42nd day of development 8))