(some spoilers for the story, so If you want to play the game first - go ahead!)

Being a writer, I tried myself at different genres - chick-lit, fantasy, sci-fi, but fairy tales weren't really my thing. I kind of blame Year Walk for me turning to fairy tales. This game showed me that foreign folklore can be interesting for English speaking audience, especially if it has memorable atmosphere and characters.
So I really wanted to show my Australian friends some of Russian folklore. But which one of Russian fairytales should I base my game on?

There was one fairytale that I remember from my childhood, and that always annoyed me - "Tsarevitch Ivan and the Grey Wolf". In this story Ivan asks for help from the Grey Wolf, but then never actually listens to him. But the wolf keeps helping Ivan. I couldn't get the moral of this story! Find a good mentor, but never listen to him - and he'll take it anyway? See, it still gets me all pumped up 8))
When you have such a strong feeling about something, you should use it - and it became the canvas of my story. 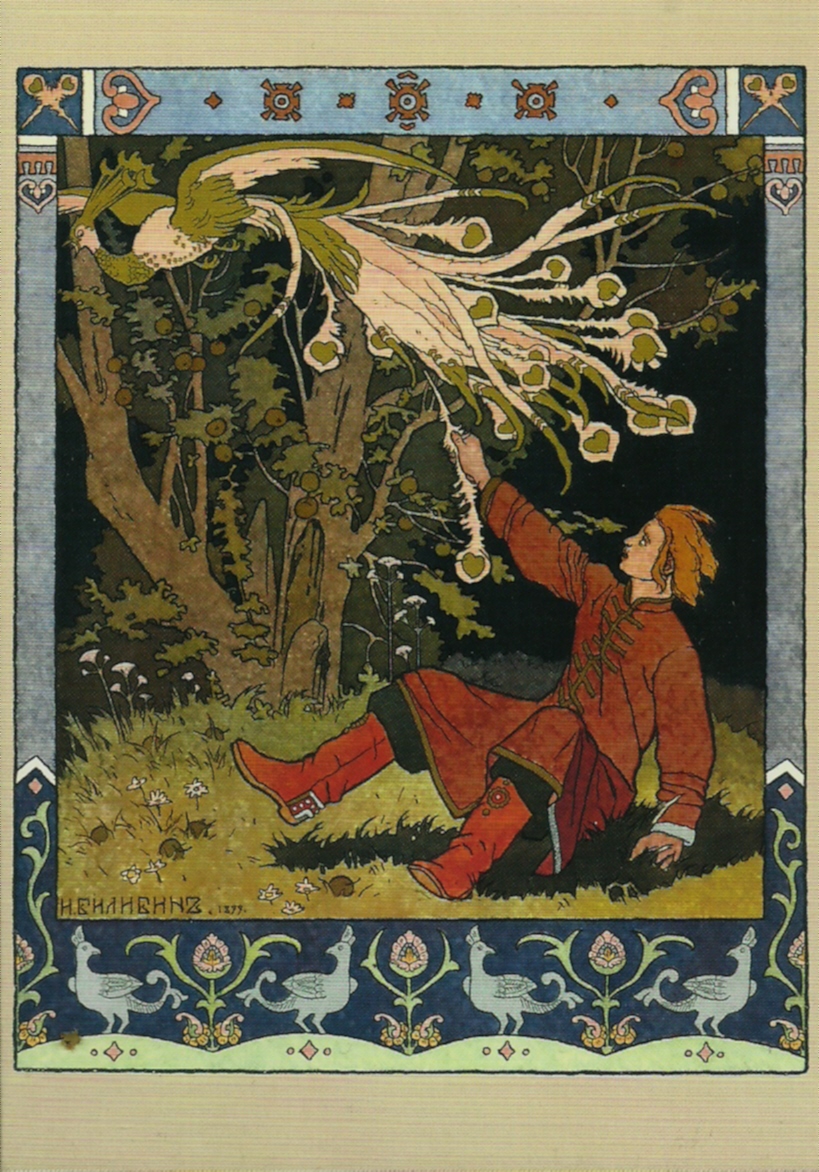 (Ivan Bilibin's illustration to Tsarevitch Ivan and the Grey Wolf)

After I took something from the fairytale I hated, I needed something that I really liked. There's another fairytale that I don't really like, but it's beginning always fascinated me. The story is "Marya Morevna", and it is a pretty generic story about a girl called Marya Morevna, that is kidnapped by a villain, and saved by the hero. But in this story the problems began when Ivan went down to his basement, and found out that his wife, Marya Morevna, keeps chained Koschei the Deathless there. It is very unusual for Russian fairytales - to have a girl capturing the main villain of most of the stories! The fairytale never explains how Marya managed to do that, but it is so fascinating! So yes, I had to put it into my story somehow.

Thinking about the main character, I knew I wasn't going to use Ivan Tsarevich. He seems boring to me. Also most of the stories he is in, are the stories about saving a girl. And I don't like it. Lucky for me, Russian folklore has another popular character. Her name is Alena. In most of the tales she has to save her little brother. Sometimes he drinks from a puddle, and turns into a goat, or gets snatched by Baba Yaga. So Alena was my character of choice.

Most of hardships Alena meets on her way are typical for Russian fairytales. But there was another problem...

Talking about the Year Walk again - that game is absolutely awesome. And I knew from the beginning that there's no way for me to create an art that will be on the same level. My art could never be so capturing, that just the strange turn of events and characters compels a player to continue. The line between "strange" and "annoying" is very thin, so I had to work to make sure that my story doesn't fall on the wrong side of it.

(Koshchey the Deathless by Ivan Bilibin)

I found an editor - a native spiker and a teacher, that I was going to test my story on. And yes, It needed testing.

For instance, Alenushka in Russian is a form of the name Alena. But there was no way I'll be explaining that to the reader every time I switch between Alena and Alenushka.

To be fair, with some of the questions my tutor had - I had them also. Even though I grew up in this culture, listening to these stories, I had no idea why the Grey Wolf helps the hero. So I had to invent a story about his debt to Marya. Also, it is a good hook for a prequel 8))

At the same time, I knew that some questions should be left hanging. Why is Koschei's death in the egg? Why are there 3 buckets of water, and 12 chains? I had no idea, but I liked it 8)

I ended up making a serious research, trying to find out which Russian cultural heroes are familiar to English-speaking audience, and which parts of hero's journey are easier to understand by foreign readers.

After some progress with the text, I moved to the art. And that needed another research.

I believe that if you can draw, you can do anything. Any strange creature, a structure or a world that you can imagine - you can move it to paper. If I could draw, I would just let my imagination go wild. But - I can't draw. So any incredible scene I would imagine - could never get into the game. First, I had to find a way for my expectations to meet my resources.

Not long before I started working on Koschei, I stumbled across paper art of Marina Adamova - and I kept returning to it in my head from time to time. Slowly, it progressed into the visual idea for my story. But this concept, making the work on art easier, made the idea of creating "the Russian feel" in the game are even more difficult. So I continued with my search.

After some time, I noticed that when English wikipedia discusses Russian folklore characters - quite often it uses pictures of two Russian artists, Viktor Vasnetsov and Ivan Bilibin. And Ivan Bilibin has a special place in my heart - I had a book of fairytales illustrated by him when I was a child, and I loved every single picture in it. So it the end, I tried to draw most of the inspiration from his pictures, modelling my settings and some of my characters after his pictures, using his approach to silhouettes and textures.

For instance, here is Bilibin's stage design for "Snow maiden" opera by Nikolai Rimsky-Korsakov, and a screenshot from my game: 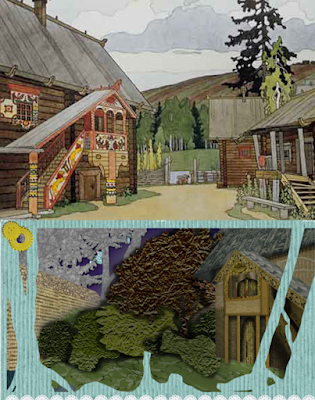 Here are two of Bilibin's Baba Yagas, and another screenshot from my game: 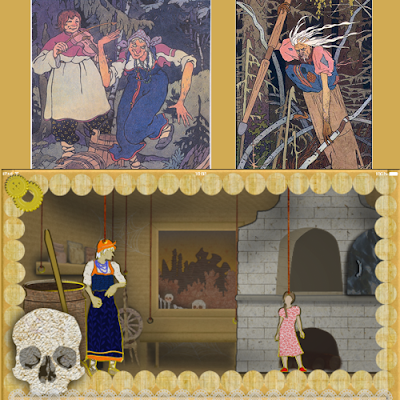 An here is tsar Berendey's palace stage design for the same opera, but done by Viktor Vasnetsov: 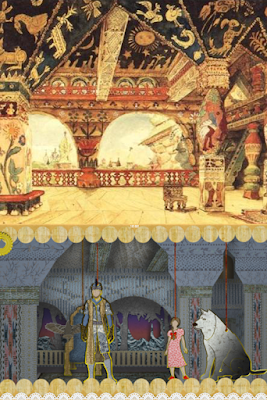 Another thing was a costume design for some secondary characters. I easily came up with Marya's armour using references from websites on Russian armour history - but Vasilisa, Uncles and Alena were still a mystery.

I can't call it anything other than pure luck - I suddenly found an article about the last ball of tsarist Russia. I showed pictures to a couple of my friends, trying to find out which one instantly makes you think "that's Russian" - and used those as my references. I ended up with these designs:

Alena, the main character, got her final design last. I tried several adaptations of Bilibin's images like these:

But Alena is right in front of you most of the time, and all those dresses were way too detailed and distracting even me. With them being a center of the screen, I couldn't focus on anything else happening in the same scene. So Alena ended up being the most generically drawn character of all.

So that describes my struggles with images and texts. There was one thing that I didn't have to struggle with - the music. I knew that I am going to use Pictures at an Exhibition by Modest Mussorgsky. Just because I love them 8) 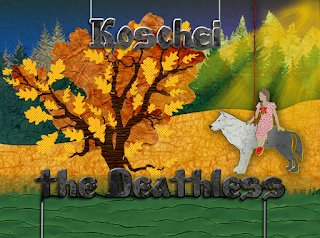